After I had been thinking about it for a while, I decided three years ago to row across the Atlantic. In my preparations, I came across a dutchman named Ralph Tuijin who had made the trip before and who, as It happens, where planning another expedition. We talked and decided to combine our efforts. Ralph became the captain and I the co-skipper for a crew that including us counted six people.

After two years of preparations, and daily workouts at the rowing club or in the rowing machine, we set out at 7 pm in the evening of April 1st from Portimao, Portugal. Our goal was French Guyana on the South American mainland. The record time to beat was 48 days and 4 hours.

Our course was managed by an autopilot (which had five backup systems) but the speed was up to us. We kept to a rolling schedule: two hours on rowing, two hours off, round the clock, every day. It was gruesome at first, especially the first three days, but it eventually became routine.

Our boat was self-sustaining, and we lacked support. We slept together in a very cramped space and lacked both toilet and shower. We ate freeze dried food, protein and power bars, energy gels, fruit and other assorted foods, including our supply of over 2000 Snickers. We drank energy drinks that we brought and water that we produced on-board using three “water makers”, one main electrical one powered by solar panels and two hand cranked pumps as complements.

Unfortunately, one solar panel malfunctioned which forced us to sharply reduce our energy consumption. We had steer manually, shut off all non-essential equipment and ration water. Our hand cranked pumps had to work around the clock, which soon wore them out. Without possibility to produce fresh water, we had to make a stop at Cabo Verde where we resupplied with water and charged our batteries before setting off for South America. 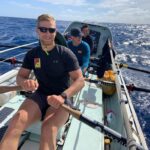 We made shore 50 days and 4 hours after we left Portugal. Personally, I was 15 kilos lighter and had terrible chafes from the salt. We lacked fresh water for cleaning ourselves, all we had was baby wipes, which led to chafing. Imaging getting chafes from walking in a pair of wet swim trunks and then having to continue for weeks. 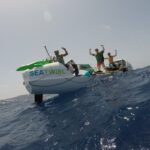